Lauren Hom is a California-born designer and letterer, who got her start lettering for lunch around New York City, and who’s currently traveling the world. Known for her bright color palettes and playful letterforms, Lauren has created work for clients like Starbucks, Sam Adams, Microsoft, Google, AT&T, YouTube and TIME Magazine.

Her work has been recognized by Communication Arts, the Art Directors Club, the Type Directors Club, and the Webby Awards. Lauren is also the author of the popular blog turned book, Daily Dishonesty, about the little lies we tell ourselves everyday.

She finds that she’s happiest when creating; so, when she’s not working, you can find her baking yummy things, selling your ex-boyfriend’s tears, or constantly sprucing up her studio, Hom Sweet Hom, in more ways than ten. Lauren’s motto is, and will always be, “Work hard, snack often.” 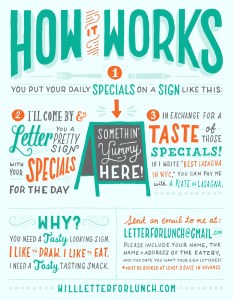 Okay. My least favorite letter to draw is probably K. I’ve been lettering for four years and they still bamboozle me all the time. I don’t know if I have disdain for any other letter form in that same way. K’s can suck it.

Q. What is your favorite flea market find?

My all time favorite flea market find was probably my prom dress. It was coral and it had sequins on it, and my Mom was a really good seamstress so she tailored it to my body. I thought it was great. My boyfriend in high school took one look at it and said it looked like the color of barf with sequins. I was like oh man, but I was a big fan of it. Teenage boys don’t know how to talk to women.

Q. What are you saving for? 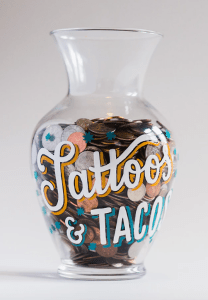 Honestly, this is actually a good question because it is practical. I think I’m just saving in general, because I travel pretty much on the cheap, and I think I’m pretty cost effective. It actually makes sense that I save more traveling than I do within New York City. So I’m probably saving for, I don’t know, a rainy day. I would love to open some kind of business. I’ve been toying around with the idea of a small, cool working space with me and my friends, or some kind of art store. I don’t know. I’m kind of saving up for if I happen to fall off a ladder and need a crazy surgery. I can’t really picture owning a home any time soon. I say I’m saving so I have capital to fund any ideas I might have in the future. 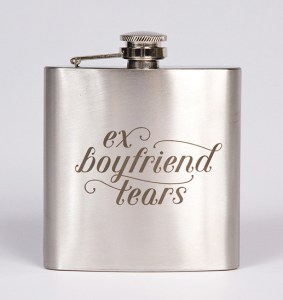 You know, it’s a good question. The first initiation of that was actually just a clear glass, it was just water. When I came up with the idea for the flask, it proved so much funnier. Definitely alcoholic. I don’t know why it’s funnier to think you would get drunk off of them. I would say it tastes like the best cocktail you’ve ever had, and you will never get a hangover from them.

Q. What baked good would you bring on a blind date?

I’ve never brought a baked good on a date. I’ve also never been on a blind date. I’m just going to think out loud here for a minute. It would have to be big enough to share; I wouldn’t just bring a cookie. I make a mean apple pie. I’m going to go with my tried and true recipe of apple pie, so I would hopefully impress my date. 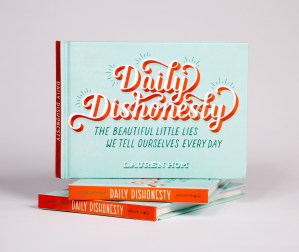 The last white lie I probably told was when I was standing in line at Chipotle the other day, and I told myself I’m just going to get a snack and it ended up being an entire burrito, and I had to take a nap afterwards.

Q. Most challenging surface to draw on?

My brother’s face while he’s sleeping. He’s at school right now, but that actually might be the inspiration for something that happens tonight, so I’ll let you know about it all.

Q. Have you ever misspelled something and realized it later?

Yes, I have, only once. Maybe this is why I am a letterer. I was my elementary school spelling bee champion, 4th grade spelling bee champion and then I lost the Triple Crown in 5th grade, and was just like a mess for a while. But I am a very good speller, and the only word I ever messed up on a project was on a menu for a restaurant, and I spelled omelette wrong. It’s a tough one because there are maybe 4 or 5 plausible ways that look kind of right to spell it and I just didn’t choose correctly.

I’m going to go with South America. I just had more bathroom trouble in South America, overall, than in Eastern Europe, because South America is where my hunger comes from.

Q. Ever drank wine on the subway, and if so, out of what kind of container? 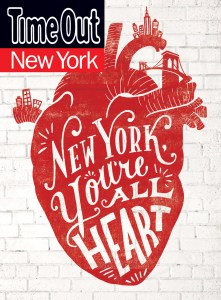 The answer is yes. Yeah, this is how smart I am, this is like design. I drank white wine on the subway with my friends in a ginger ale bottle; actually it just looked like ginger ale. That’s a very good New York question. It’s either drinking on the subway or crying on the subway. It’s one or the other, or both, then you’re a true New Yorker.

Q. Would you rather not be able to laugh ever again or create ever again?

Oh my gosh, why would you ask me that?! You know what, I’m going to stick with create. I would just be a really stone cold artist, and I think I would be okay with that. Oh yeah, I’m going to go with losing the ability to laugh, so I could still create, because I like all kinds of things. I like cooking. I like sewing. I like designing.