Sara Blake draws from the heart. Her inspiration starts from her eyes, then moves down her arms and goes to her hands, which she uses to illustrate and design intricate and immaculate images that seem to defy conventional thinking.

Sara Blake is a designer and illustrator with an immense amount of skill in her front pocket. A creative director by day and an illustrator by night, she runs and bikes and never stops trying. She has worked with a lot of great clients such as Nike, Ford, Hurley, IBM, Wired Magazine, VICE Media, Warner Bros Entertainment, Marvel Entertainment, Scotch & Soda, and TEDx Labs.

It took a lot of time and persistence to get her to answer our Dumb Questions, but it was well worth it because it was a fun, fantastic honor to ask an artistic visionary some seriously Dumb Questions.

Q. Do you have a go-to Brussels sprouts recipe?

I have to confess that I don’t cook because I don’t have time and my kitchen is small. I actually use my oven for storing things. So I have a couple go-to places in the neighborhood. Personally, I’d say just roast them, man, in olive oil, salt and pepper, that’s the best.

I don’t like instructors yelling at me. I’m a solo sport type of girl. I’ve always been a runner, but I started cycling with my boyfriend because he races. I’m not really good. I’ll just be a weekend warrior with the cycling stuff.

Q. What is the most used item on your desk right now?

Other than my computer and my headphones and speakers for playing music, probably just my sketchpad for ideas. A rough sketchpad, nothing that anyone will ever see, it’s just important for taking notes and general sketching and notations.

Q. Are you of the old school mindset, do you hand sketch everything first?

I do. I work with a Wacom tablet, but I have to do everything with pencil and paper first. My brain doesn’t really work on screen all the time, so I do feel old school. And the reason why I got into illustration, and the medium I do, mix media, half digital, half hand-drawn, was more an accident. I was a fine artist in school and then was doing my day job. I had to learn how to design and mix the two. This is how I’m happiest.

Q. If you could collaborate with any dead musician, who would it be?

Most of my biggest worship bands are still alive and kicking right now. With respect to our neighborhood and New York City, probably one of the rockers, Jimmy Hendrix. He was playing in the Village in the 60’s, so I would just want to ask him about New York back then and walking the same streets that I walk now. And if he would be down to make some tribute videos. He would probably let me illustrate some crazy stuff.

Q. If you were a peacock, what animal would be your sidekick and what would your names be? Well, I was thinking about this one, because you have to have a reason for this one. So if I’m peacock and you’re there to put on a show, and you have to have a sideshow. Then I need someone with skills. I was thinking a chameleon or a monkey. The Peacock is a pretty showgirl, showman really. Then the monkey or the chameleon could put on the show while the peacock, me, is changing colors. I’m thinking our names would be like Benny and June. That’s my answer.

Q. If Lady Liberty were a modern day pop star, to whose posse would she belong?

I’m not hip or down with the star posses, but I spend a lot of time on Instagram so I kinda know second hand, and I would have to say Lady Liberty would be in Lena Dunham’s posse.

Q. Do you have any illustrations of your own tattooed on your body?

Absolutely not, no way. First of all, anything I make, I hate it like a year later. I don’t hate it, but I’m trying to make it better. I’m over it. I’m sure that’s how my artist feels about some of the tattoos on me. Dogs in real life. Visually, birds and feathers and foliage.

Oh, I don’t eat at Subway, but let me try to think of an answer. Probably the only one I know of because I run the same route every day, there is one on like Houston and I don’t want to say it but corner of Lafayette or something. And it’s always so sad, just like always one person in it and they are sitting alone, and they look like they hate their sandwich so much. By elimination I would say that one, because I don’t know any other Subways. 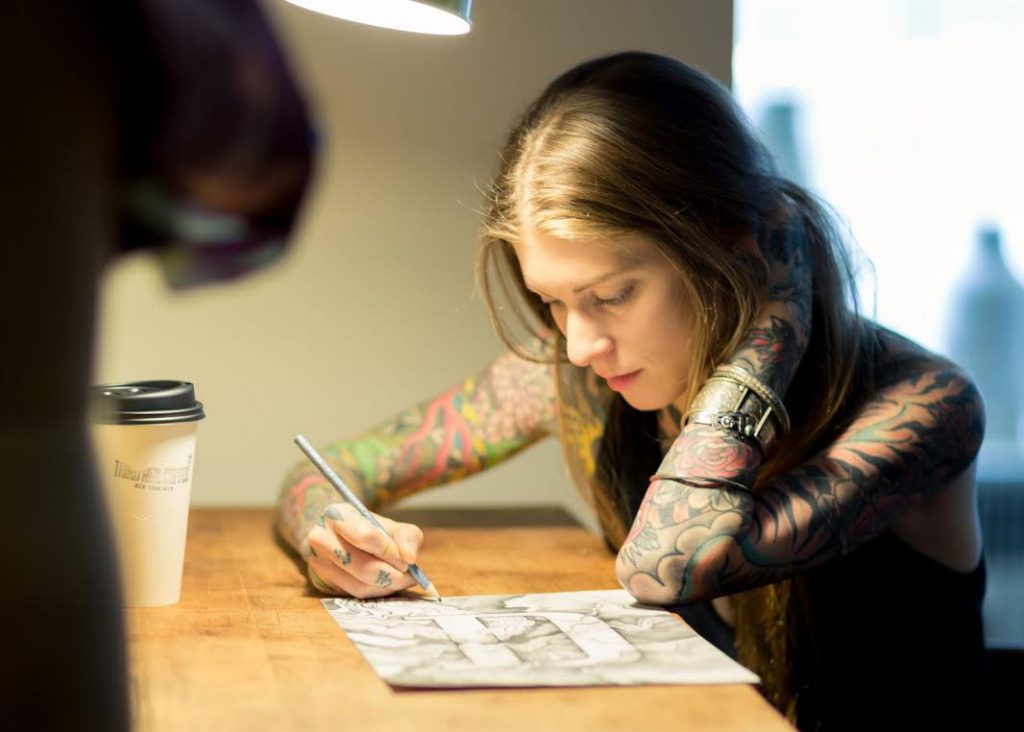