Jessica Hische is a hand letterer and illustrator. That means she mostly draws amazingly cool letters (and words) by hand. She has done work for HBO, The Washington Post, and Starbucks, just to name a few of a few of her vast portfolio. She’s even been commissioned by the United States Postal Service, done a ton of book covers, as well as all the lettering for Wes Anderson’s Moonrise Kingdom.

She got her start with the legendary Louise Fili, then branched out on her own to conquer every letter in the alphabet. Now, with offices in Brooklyn and San Francisco she covers a lot of ground, from A to Z. All in all, Jessica takes type design to a whole new level. 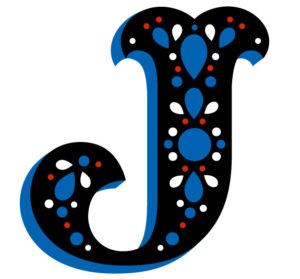 J, though I think most people hate the letter that begins their name. I just have a hard time drawing J’s that I like.

Q. What was the most unexpected thing about working with Wes Anderson?

His email address. I’m not going to share it, but you would definitely think it’s a fake Wes Anderson fan writing you if you received a note from him.

Q. Can you give us an example of one thing you wouldn’t want your Momager to handle for you?

That’s actually hard to come up with! She handles some pretty personal stuff.

Q. When’s the last time you popped on an XYZ Affair record?

It came on accidentally when I was driving in to work this morning (my Apple music is weirdly set up to play my full music library in alphabetical order by song title), but other than that I usually end up putting it on when I want to show friends their music video that went viral-ish and has old Nickelodeon stars acting in it.

Q. Which city has a worse stereo-type, San Francisco or Brooklyn?

Maybe San Francisco? I could be biased though, as I can never think bad thoughts about Brooklyn. Both cities have such evolving stereotypes though. 15 years ago you probably would have thought of a patchwork-pants-patchouli-smelling-dread-headed-free-spirit when you thought of SF and now it’s just a tech guy ordering bottle service Fireball.