Singer, mathematician and designer Lauren Peters-Collaer seems to find success around every corner. With a slew of book cover designs for legendary names such as F. Scott Fitzgerald, Ernest Hemingway and Hillary Clinton under her belt, our newest interviewee has been staying busy living in Manhattan and creating clean, conceptual and vibrant pieces of work.

Q. When’s the last time you snorted while laughing?

I think it must’ve been while watching Parks and Rec. I laugh really hard a lot of the time. But snorting… That’s got to be an Amy Poehler creation.

Q. What’s the weirdest thing you’ve seen on the subway?

I got on the subway in Midtown and there was this woman standing in the middle of the car I was on singing Doobie Brothers songs! She wasn’t even asking for money – she was just singing the songs. She did that all the way to Brooklyn.

Q. Describe the strangest bathroom you’ve ever been in?

I studied abroad in Ireland, and there was some hostel that I was in where the door to the bathroom wasn’t constructed right. The door hit the toilet, so they just cut a toilet-shaped hole in the door. 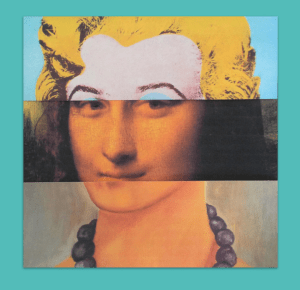 Q. What gives you goosebumps?

Q. How do you organize your books?

I organize them by spine. There’s no real system. It almost looks chaotic, but it’s in a very considered way. I make sure they look very balanced, and that the color distribution is right. Like, “there needs to be a green spine here.”

Q. What’s your printer anxiety level on a scale from 1 to 10?