Craig is a frequent contributor to the New York Times, Time Magazine, Fortune, Forbes, The Boston Globe, Newsweek, Wall Street Journal, LA Times, and Atlantic Monthly. The man is a constant, commissioned by design firms, advertising agencies, companies and publications all over the world.

Craig has published several children’s books including the Stanley series, Trucks Roll, Hank Finds Inspiration, Lots of Dots, and Bee & Bird, as well as a 176-page monograph titled The Illustrated Voice. He has also designed several stamps for the US Postal Service, including the 2006 Love Stamp.

His work is iconic and intricate, yet playful, and it always tells a searching story of existence. The man himself is the same way. He is smart and funny and open. He remembers his 8th car! This interview was a true honor.

Q. Last time you were grumpy and why?

It had to be this morning when I saw that Trump was still running for President.

I don’t frequent any, and it’s not out of any high moral, ethical standard or anything. I just don’t, but I can offer this though, that based on their commercial, an animation from 2011, I’d go for Chipotle. They must be a great chain restaurant, because it was probably the best commercial I’ve seen in years. I want to say it was a stop motion thing, and it was absolutely fantastic.

Attractions definitely. My aim is true.

Q. One place you have always wanted to live?

Q. What beverage do you prefer on an airplane?

Just a cold beer. A cold imported beer. When the cart comes by and they say, oh sorry all we have is Pabst left, then I would go gin.

Q. Do any of your illustrations appear in your dreams? 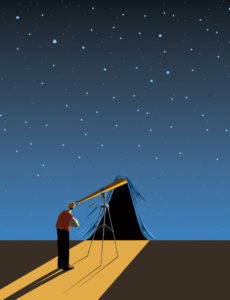 I would say never, but occasionally clients do. Those are usually nightmares.

Q. Would you rather wake up for a day as Daniel Craig or Frasier Crane?

They are both so bad. One was a terrible Bond. And Kelsey Grammer, oh geez, oh shit. I think if I woke up as either one, I would go right back to bed and hope that I wake up as Joe Frazier.

Q. Last song you played on your guitar?

Q. Who was the last illustrator who made you say ‘Wow’?

I say wow way too often. It’s got to be Christoph Niemann, and it’s usually followed with ‘why the hell did he get that job’? I’m a huge fan of his. His work is brilliant and he’s every bit as nice as a guy as his work is; a mature type of guy. If you get him to do this interview you would have a good one.

Q. What was your first car?

Q. How do you feel about taking photos in museums? 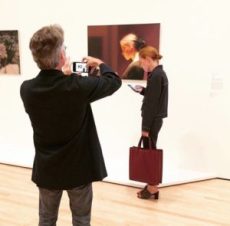 I absolutely think it’s okay. I hate taking photos with an iPad though, because somebody’s view is blocked. I was in a museum and my daughter happen to have her hair styled exactly like a Gerhard Richter painting. I took a photo of her in front of the painting and then a person tapped me on the shoulder and said I’m going to send you this picture. She took a great picture of me taking a picture of my daughter in front of the painting. And we began this whole email exchange. It was a trip, but had I not been doing that, we probably would not have met. It was very interesting.

Q. If you could be anything else, what would you be?

I would be a writer.